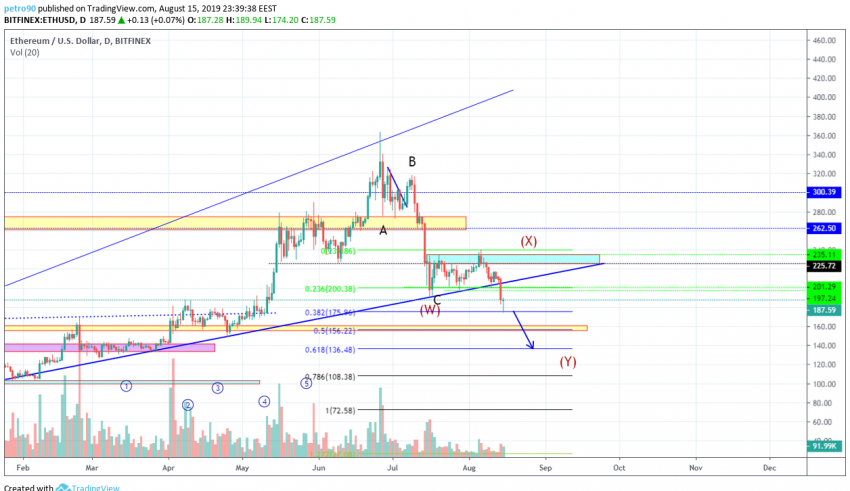 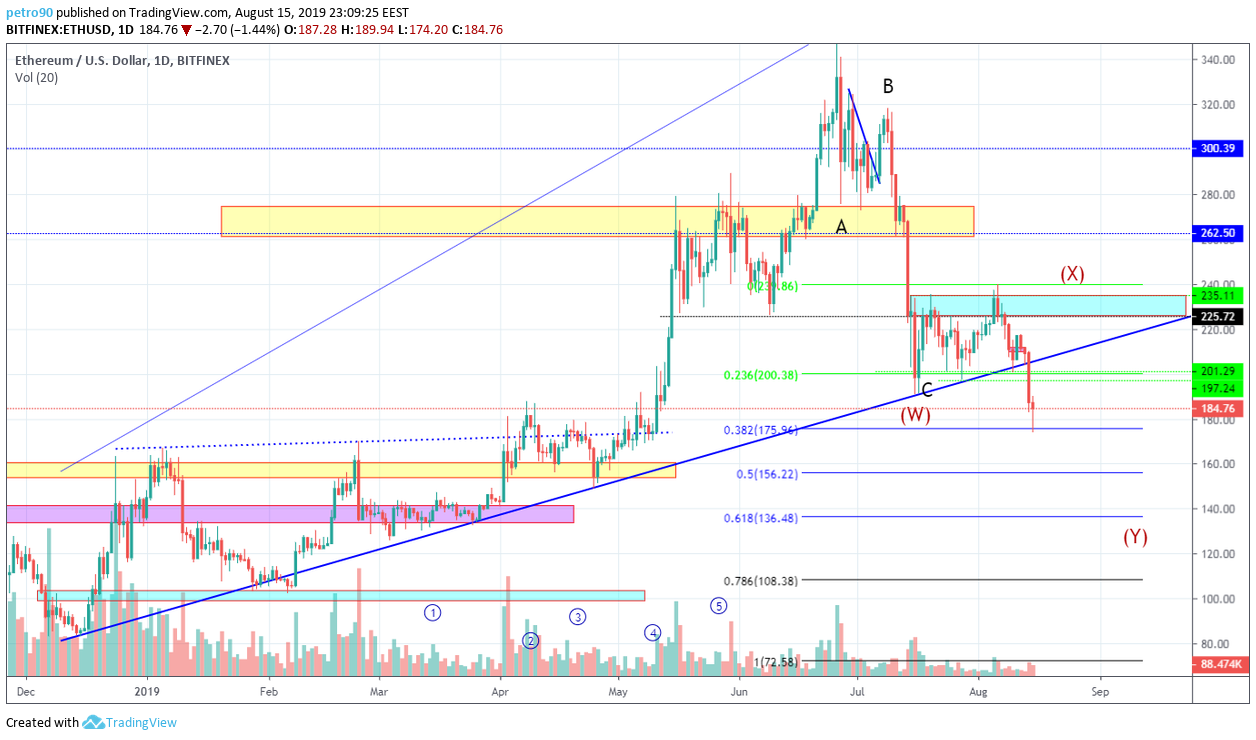 When your primary defense silently falls before you, panic begins. For half a year, buyers have been building an uptrend, keeping the blue trend line which sellers have tried to break through 5 times. Well, the 6th time was successful for Ethereum sellers!

At the 4-hour timeframe, we can see clearly what a powerful candle on increased volumes went through the blue trend line. After that we still do not see a sharp response from buyers: 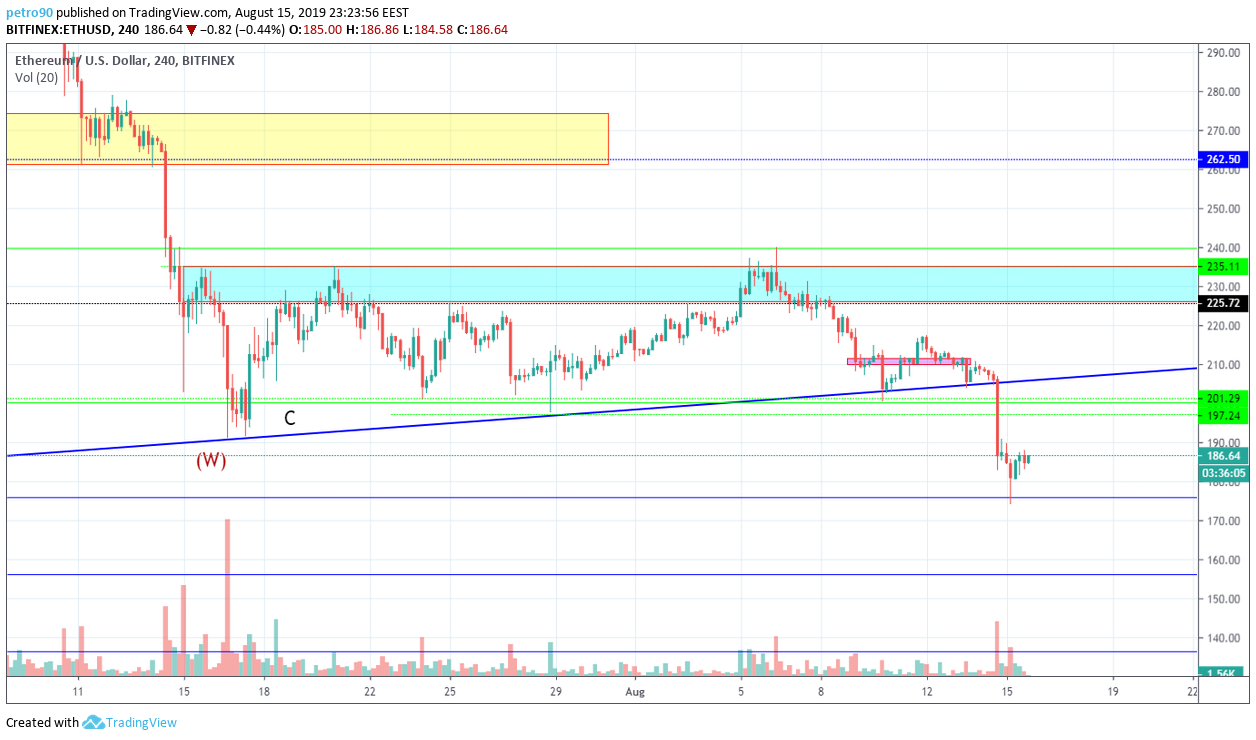 In addition to the breakthrough of the blue trend line, sellers managed to test the important price mark $175, which we have repeatedly written about in previous analyzes. The confirmation of the importance of this price mark is the volumes increasing during testing (clearly visible on the 15-minutes timeframe): 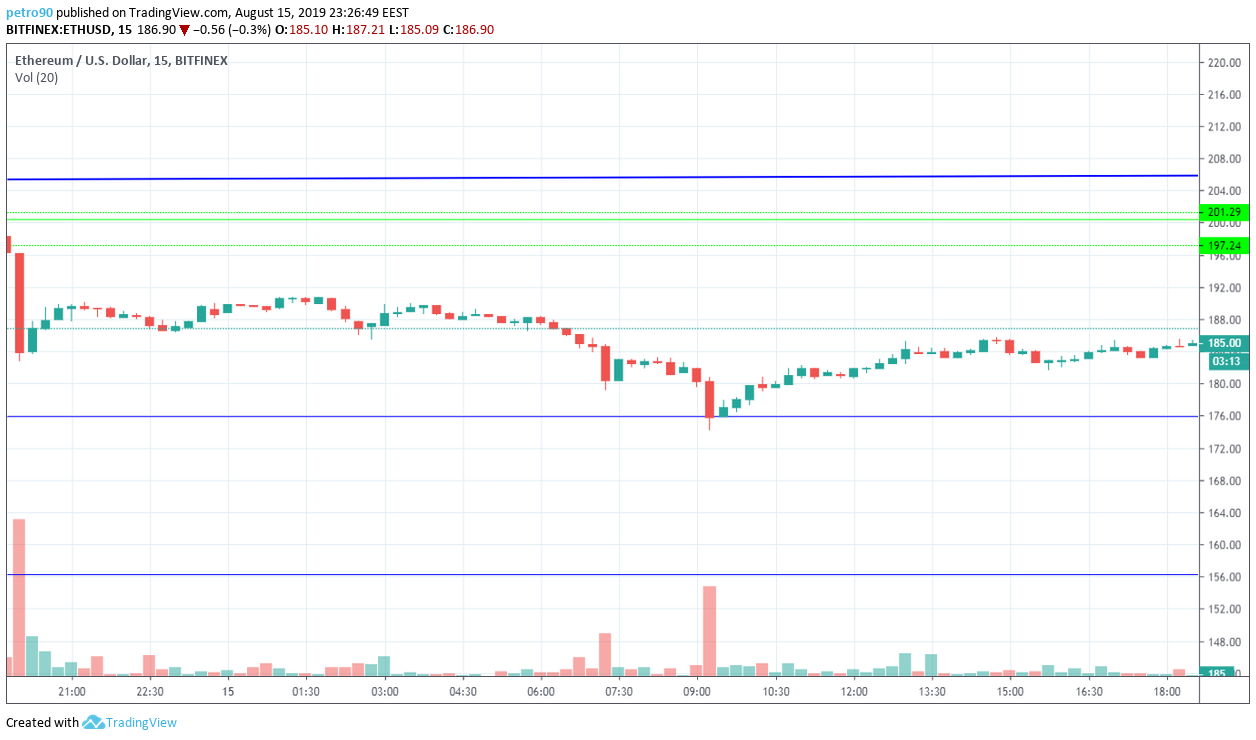 On a daily timeframe, a pin similar to Bitcoin pin was formed. The probability of correction and sellers strength check in the area of ​​the blue trend line is quite high. However, we are inclined to think that after this correction, the fall will continue at least to the long price zone of $155-160: 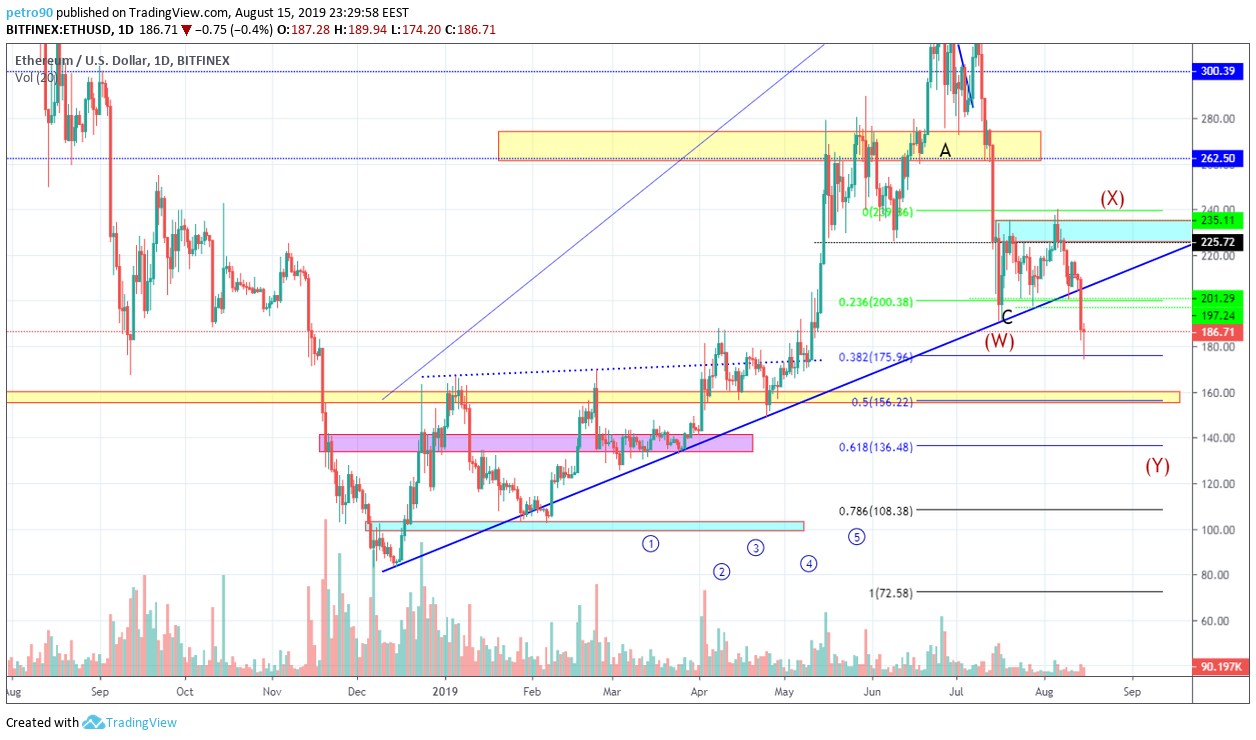 This price zone was difficult for Ethereum buyers, so hopefully, they will protect it.

As for the situation which shows that the semi-annual trend of Ethereum buyers has ended and the correction is coming, the mood of buyers is quite good. Buyers with their marginal positions showed that they were not particularly upset by the fact of changing of force in the market: 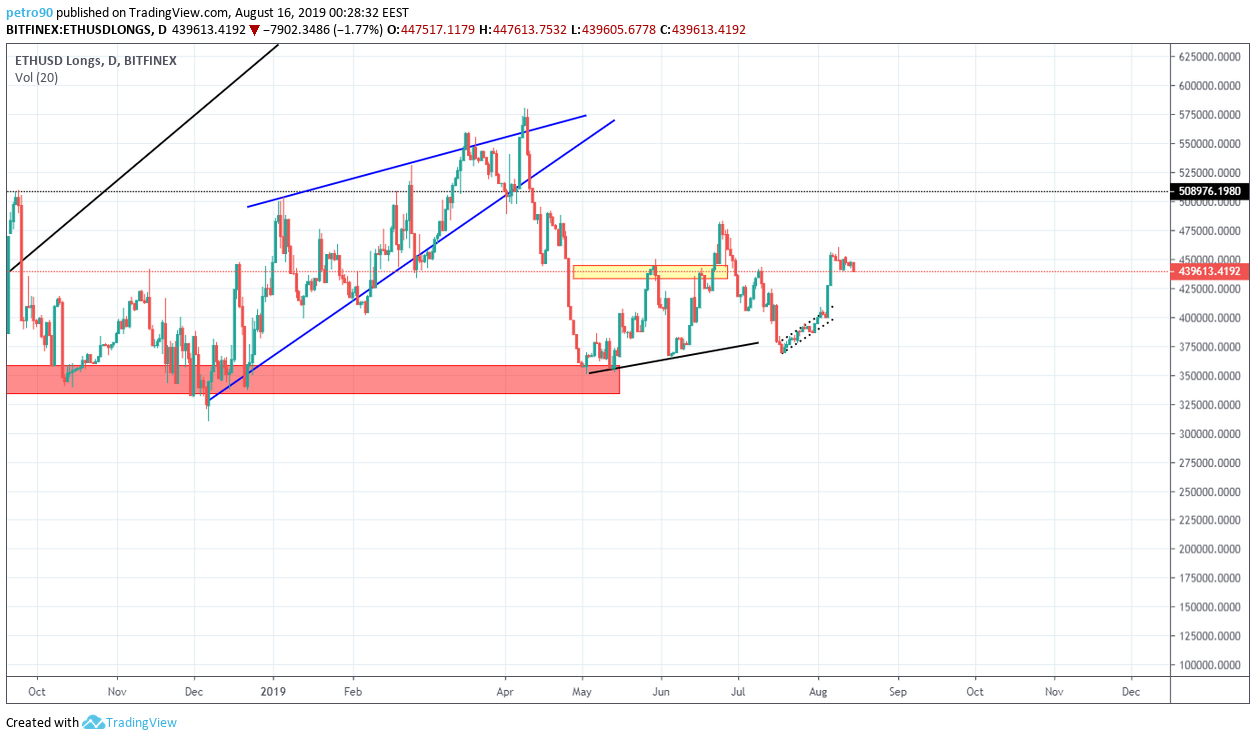 Sellers are all stable in mood. More precisely, everything is stable with a lack of clearly expressed mood. According to the marginal positions, consolidation continues: 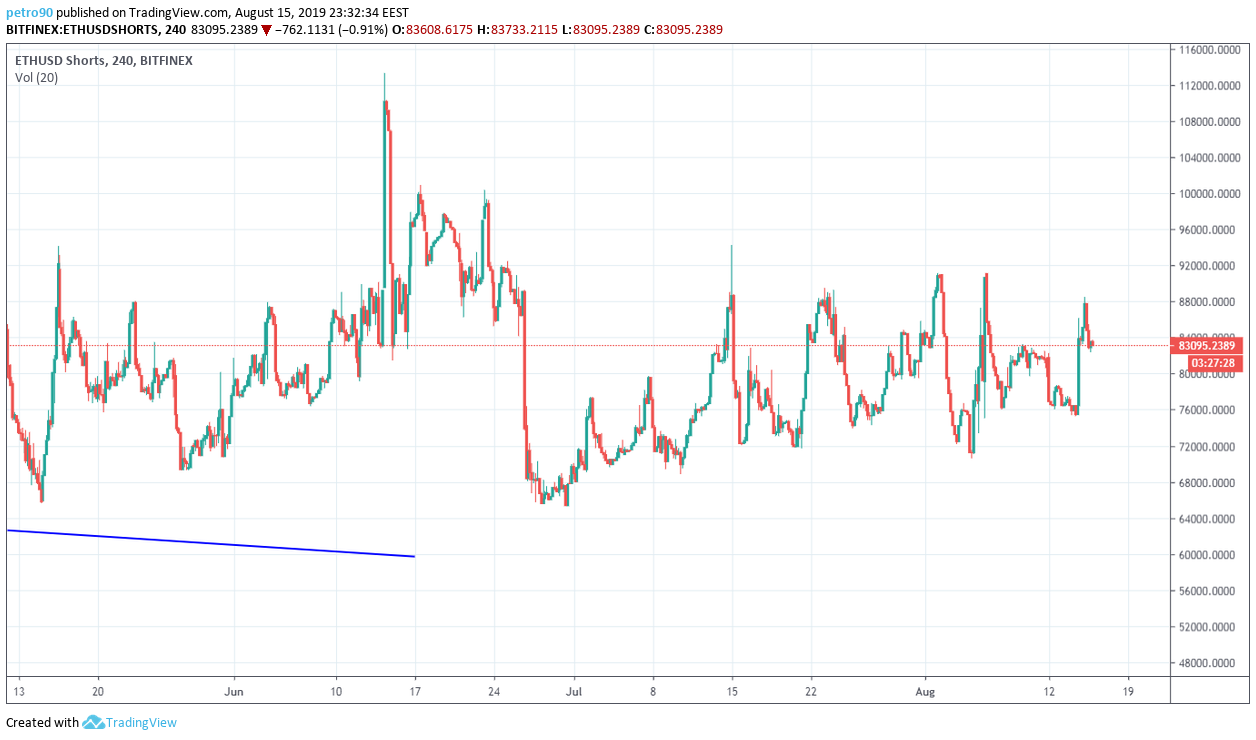 Talking about the wave analysis, the scenario that we wrote about in our last analyses works well. After the first wave of the fall, which began on 26 June, sellers organized a correction wave in the form of consolidation. Thanks to yesterday and today, sellers have updated the local high. They are now starting a new wave of fall which, in our view, should continue at least to $135: 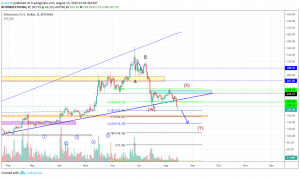 Although, given the nature of the fall wave correction from 26 June, we can say that buyers are rather weak and the new fall wave may even be more powerful than the first one. However, this is global, and locally we will follow Ethereum and its critical points for two days. Let’s see on Saturday whether sellers will be able to test $155-160.