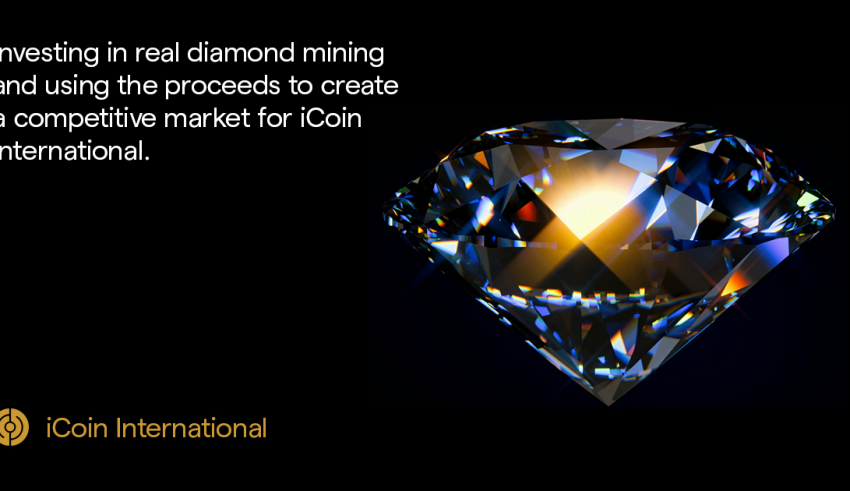 Blockchain-based platform iCoin International is embarking on an initiative to create a whole new economy for the diamond mining industry, keen on shedding its former reputation of inefficiency and lack of transparency, taking the sector to new heights of development.

Diamonds are one of the most sought-after gems in the world. Commonly used for the production of aesthetic jewelry and in manufacturing thanks to its well-known physical properties of being one of the hardest naturally-occurring substances in existence, these precious stones come at a high price. A lack of a proper monitoring infrastructure throughout its production has led to dubious sourcing and ineffective mining and distribution, with a general lack of transparency throughout.

iCoin International aims to tackle this issue head on, using the innovative tech of blockchain and AI to bring about a renewed diamond mining industry where immutable records on blockchain and a clear sourcing path will lead to a new age of speed, efficiency and transparency.

iCoin International is owned by the Millenium Mining Corporation located in Freetown, Sierra Leone, long known for its precious stone industry. Last year, the company exported USD 150 million in diamonds, with geological surveys in the slow-flowing Baimbawai Pool in the Sewa River showing estimates of up to 1.5 million cubic meters of diamond-bearing gravel that ranges from 0.2 to 0.5 carat per cubic meter — in essence, a potential of some 200,000 to 750,000 carats of diamonds.

Through tokenization, a monitoring and auditing system operating in real time will help build a trustless network on a blockchain platform, with opportunities for corruption of data duplication virtually non-existent. Every diamond extracted will have a timestamp on the blockchain, allowing it to be traced throughout the supply chain. Smart contracts will also provide instant automatic transactions on an open distributed ledger that will ensure transparency for all financial transactions.

iCoin’s utility token will serve as a currency to purchase diamond merchandise on its official website, whereby profits will be used back into the iCoin market to grow the platform further

The predicted valuation is a 5,000% return on value growth over the five years prior to the launch. The blockchain diamond mining operations will be monetized through the ERC20 native token of the iCoin platform. Traders and investors can now book their early spots via an IEO event on the LATOKEN exchange. The tokens will be released once the event is over allowing the chance for early backers to trade, use a medium of exchange or hold for profit.

Backers can get tokens at LAToken.com exchange using BTC, ETH or USD. The tokens will be released once the event is over allowing the chance to trade, use a medium of exchange or hold for profit.

Millennium Mining Corporation has confirmed it will offer a buy-back program for iCoin tokens at the market price rate one year after the IEO launch. In the secondary market, the token will be available to trade with additional ERC20 tokens.

With this new initiative, the diamond mining industry will thrive and a whole new economy will come into force with the merging of decentralized technology and artificial intelligence. In the foreseeable future, Millennium Mining Corporation has expressed a plan to launch into other natural resource markets, thereby expanding its base of operation according to a set timeline.

To learn more about the unique opportunity to disrupt and profit from real diamond mining, visit the iCoin website.