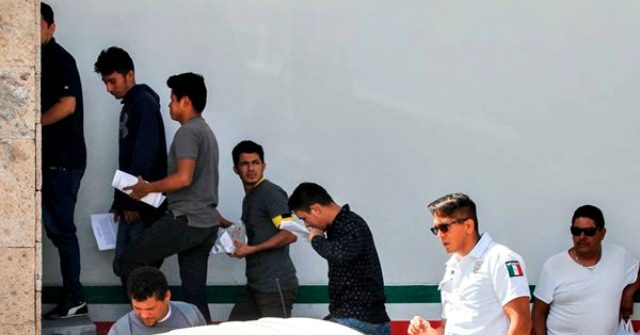 Mexican authorities found and detained 600 migrants who were stuffed inside two tractor-trailers in human smuggling incidents attempting to reach the U.S.-Mexico border. Authorities reported several of the migrants as being from Bangladesh, India, Ghana, Cameroon, and others from Central American countries.

Mexico’s National Immigration Institute revealed in a prepared statement that the mass smuggling attempt took place on Thursday in the state of Veracruz. Authorities found the migrants inside two tractor-trailers.

Details of the detention were not released by the INM, but they claim to have begun administration proceedings to deport some of the migrants and allow certain ones such as family units to stay.

Mexican immigration officials claimed that the group included 455 men and 155 women. The statement did not reveal how many were adults, however, they claimed that 37 migrants were from Bangladesh, one from Cameroon, one from India, and six from Ghana. The state of Veracruz has a long history of being used as a drug and human smuggling corridor connecting the port city of Veracruz and the central part of Mexico with the border state of Tamaulipas. That border state is currently seeing the brunt of the human smuggling activity in the areas controlled by the Gulf Cartel and the Cartel Del Noreste faction of Los Zetas.

Those two criminal organizations have been able to profit heavily from the lack of immigration enforcement by Mexican federal authorities and managed to overwhelm the U.S. Department of Homeland Security thus creating a crisis that has plagued the Biden administration.

Ildefonso Ortiz is an award-winning journalist with Breitbart Texas. He co-founded Breitbart Texas’ Cartel Chronicles project with Brandon Darby and senior Breitbart management. You can follow him on Twitter and on Facebook. He can be contacted at [email protected].

Brandon Darby is the managing director and editor-in-chief of Breitbart Texas. He co-founded Breitbart Texas’ Cartel Chronicles project with Ildefonso Ortiz and senior Breitbart management. Follow him on Twitter and Facebook. He can be contacted at [email protected].