The United States Federal Reserve left some crypto enthusiasts unimpressed this week when it unveiled plans to release a real-time payments and settlements service. Known as FedNow, it is hoped the infrastructure will lead to faster transactions 24 hours a day, seven days a week. Presently, it is set to launch some time in 2023 or 2024. Morgan Creek Digital Assets co-founder Anthony Pompliano was dismissive of the plans, tweeting: “Bitcoin is already available.” Despite his oozing sarcasm, other crypto-related companies have leapt at the chance to make a contribution. Back in June, Ripple Labs announced it had been elected to a Fed steering committee connected to the project.

Long faced with punishing sanctions that have exacerbated the desperate poverty faced by millions of North Koreans — and stymied the development of its weapons of mass destruction programs — Pyongyang has turned to hacking crypto exchanges in recent years to fund its regime. This week, the United Nations gave an updated estimate of the illicit proceeds naughty North Korea has gained through these cyber attacks: a whopping $2 billion. In a confidential report that made its way to the mainstream media this week, the U.N. warned that South Korea appears to be a specific target of the secretive state’s malice. All this comes as Kim Jong Un continues to test ballistic missiles — executing five launches over recent weeks.

Crypto tax bill introduced in the U.S. House of Representatives

A bill has been introduced in the U.S. House of Representatives that aims to stop crypto transactions from being taxed twice. Rep. Ted Budd (NC-R), who is spearheading the initiative, fears that current rules imposed by the Internal Revenue Service are affecting adoption rates. If successful, Budd’s bill could have huge ramifications for the crypto world, and it’s the latest attempt to try to achieve tax code clarity for investors. Meanwhile, on the other side of the pond, the taxman in the United Kingdom is reportedly requesting crypto exchanges to reveal details about British customers and their transactions in a quest to clamp down on tax evasion. 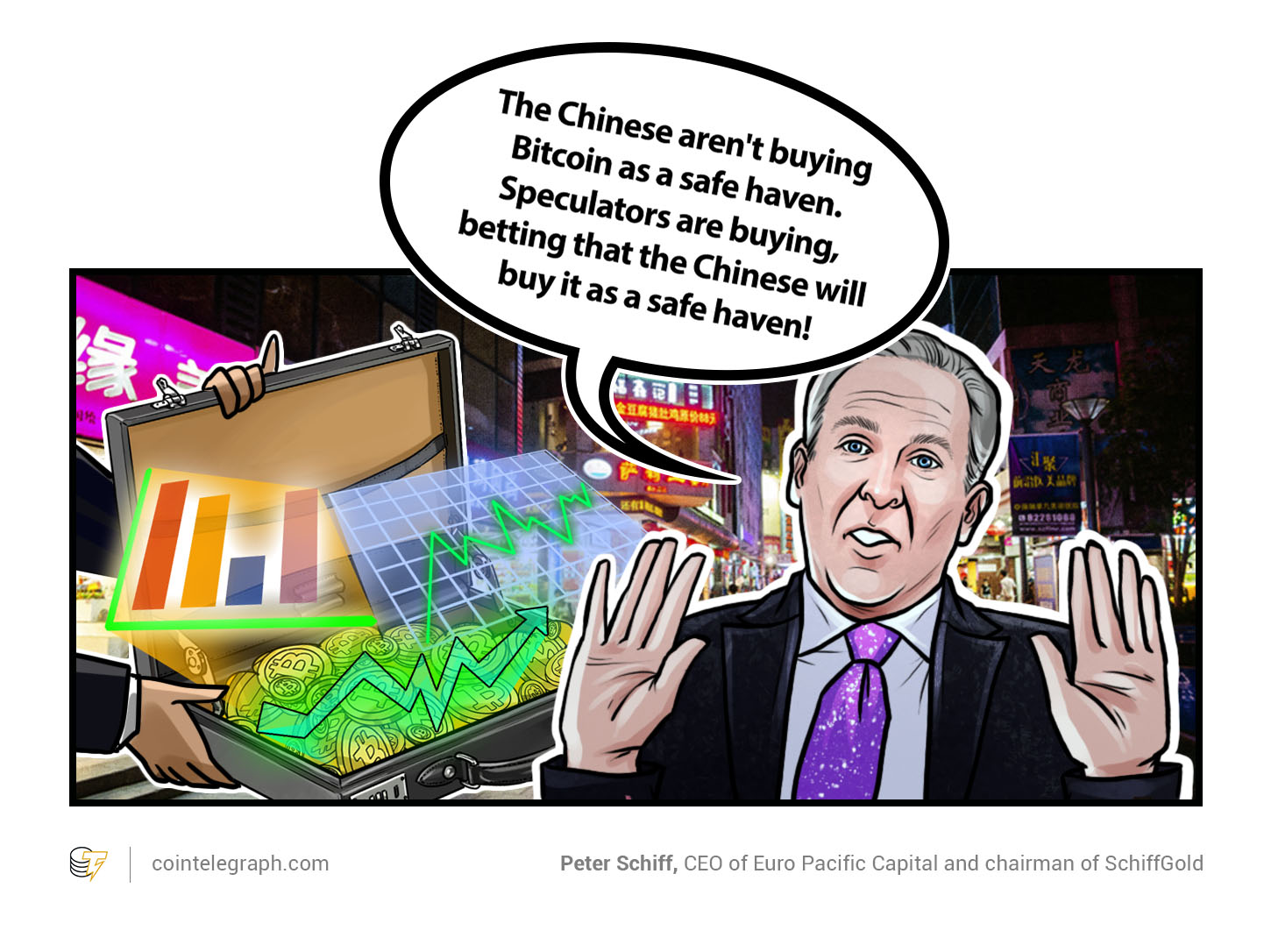 Excited investors hoping for some sizeable gains when Litecoin halved block rewards this week were left disappointed. On Monday, the incentive offered per block of mined transactions was slashed from 25 LTC to 12.5 LTC — with feverish speculation that the increased scarcity would give prices a shot in the arm. In the end, LTC rose just 13% to hit $104 — and since then, prices have been in decline, dipping to the low $80s. Bitcoin comfortably outperformed Litecoin and other altcoins. Eric Turner, from the Messari blockchain analytics firm, told Al Jazeera: “Now that the halving is here, some investors are starting to exit the trade. Halvings tend to be priced in, so the event itself isn’t the positive catalyst that many expect.”

Big news this week as reports emerged that 15 global jurisdictions — G-7 countries among them — are developing a system to track crypto transactions. By collecting and distributing personal data on individuals who dabble in digital currencies, the Financial Action Task Force is hoping to prevent crypto from being used for money laundering, terrorism financing and other illicit activities. Such an initiative could pave the way for legal measures to be launched globally. Details are expected to be fleshed out in 2020, and it is believed that the private sector will be responsible for managing the system once it goes into force. 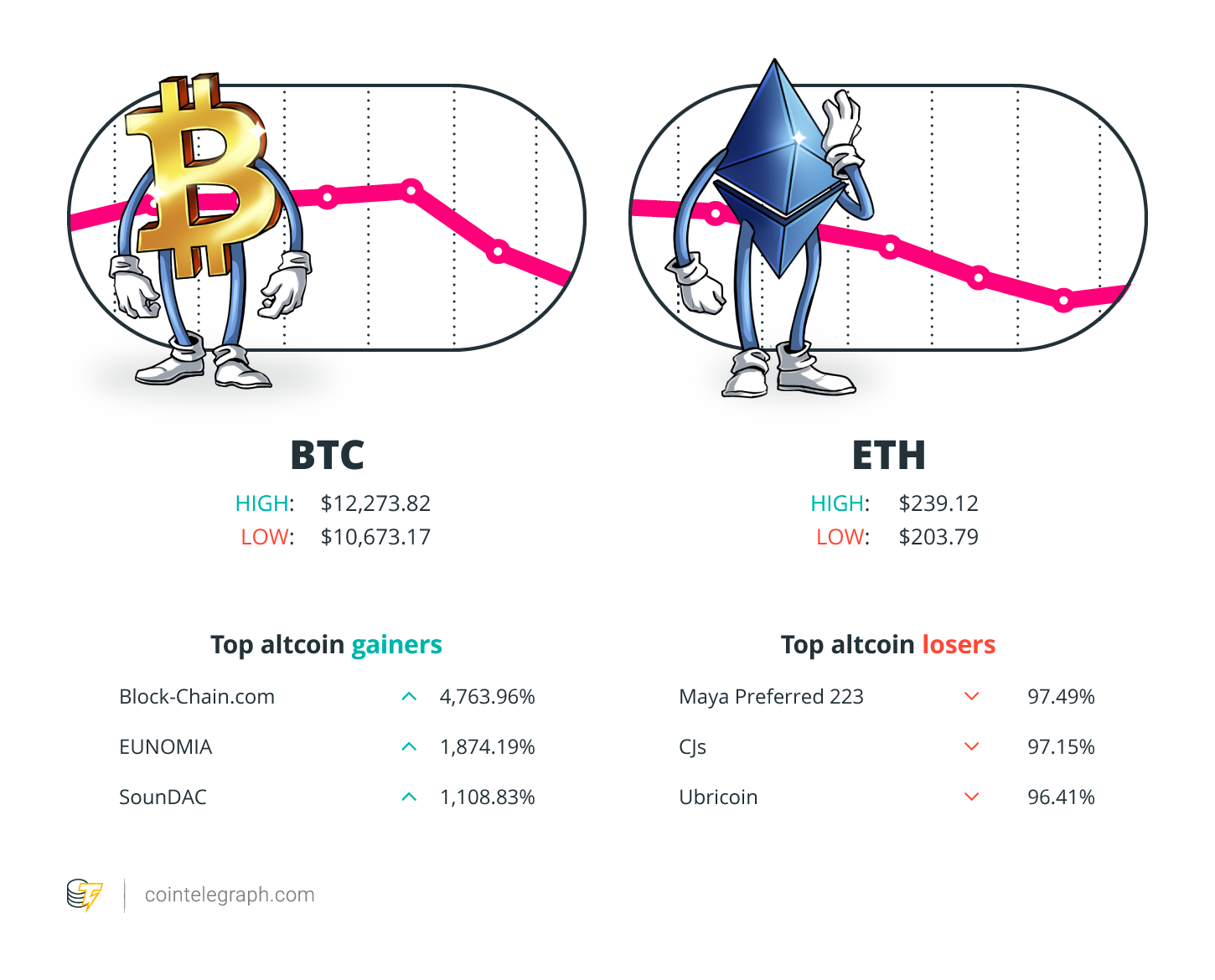 For more info on crypto prices, make sure to read Cointelegraph’s market analysis.

“I thought there would be many more competitors at this point that were really relevant, but people have consolidated towards Bitcoin because it’s decentralized.”

“Not only will a no-deal departure from the EU create turmoil and volatility across two major fiat currencies, it will also trigger an identity crisis for the global system as the contingency and vulnerability of major global fiat currencies is laid bare.”

“UPDATE: Bitcoin is performing as designed during times of global instability.”

“You can very clearly see some macro correlation there. I think the broader theme of, you know, Bitcoin specifically, crypto more broadly participating in these global macro forces is becoming more and more clear. Rising nationalism, rising amounts of currency conflict, trade wars, these all obviously are supportive of a non-sovereign, highly secure digital store of value.”

“Right now it’s very expensive; it’s very hard to value, but Bitcoin is going to be here for a long time and long term I think it will be part of a lot of hedge funds’ portfolios.”

“That’s crazy. I forbid that, that’s insane, that breaches everything about diversification in investing. […] 50 percent? shame on you! That’s nuts!” 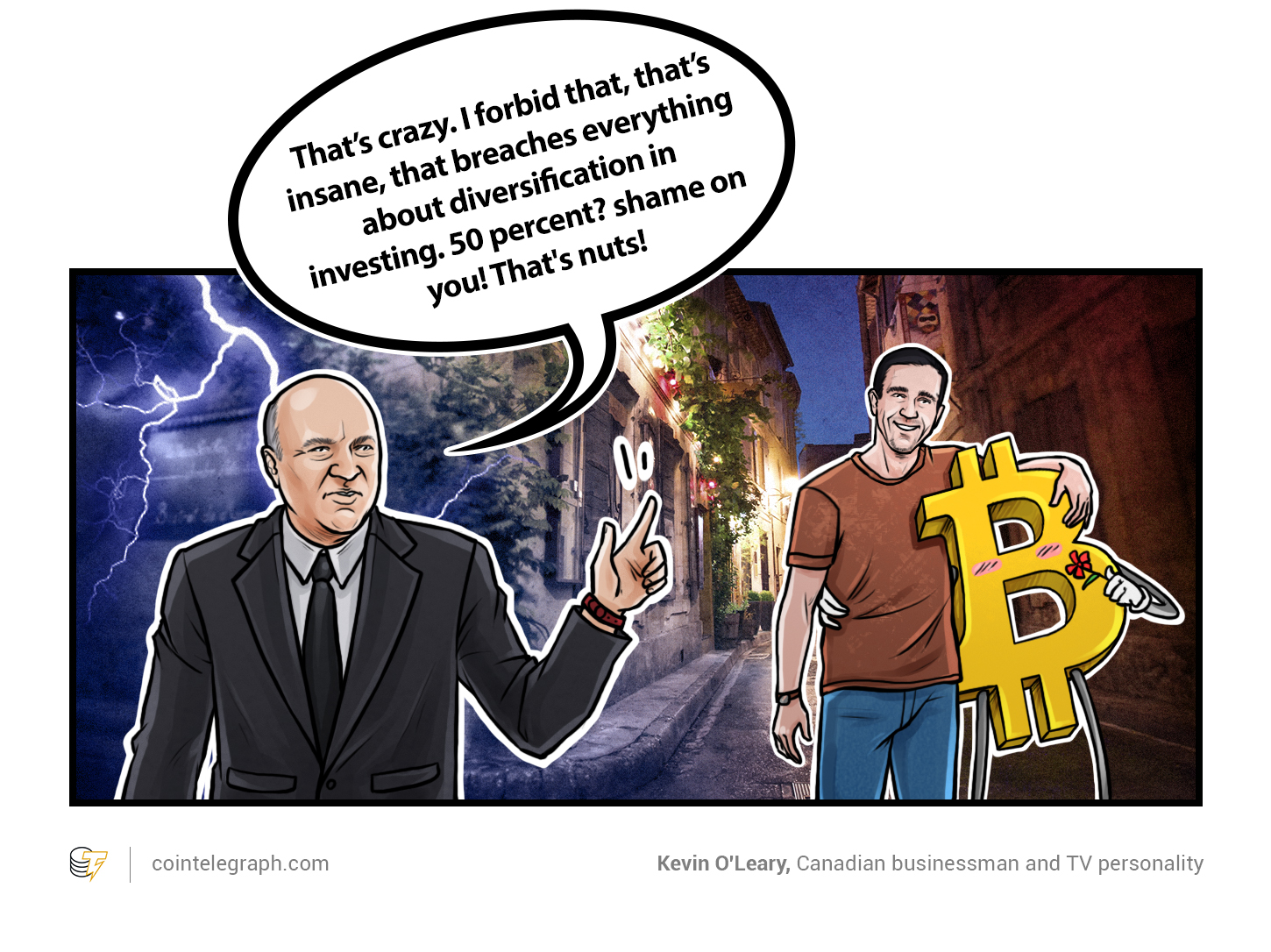 “Throughout the last few years, we have been seeing the trend of Bitcoin increasingly becoming fundamentally correlated to more macro moves as increased economic uncertainty in the world increases.”

Prediction of the Week

We love a good prediction here at CT Towers — especially a six-figure one. This week, serial VC investor Tim Draper has forecasted that BTC prices will balloon to $250,000 — that said, he cautioned that current trends could delay progress in reaching this milestone. He told Yahoo Finance, “I thought there would be many more competitors at this point that were really relevant, but people have consolidated towards Bitcoin because it’s decentralized.” Draper has made this prediction several times over the years, but never with as much conviction as John McAfee, who has vowed to eat his own penis if BTC/USD fails to hit $1 million by the end of 2020. Okay, John! 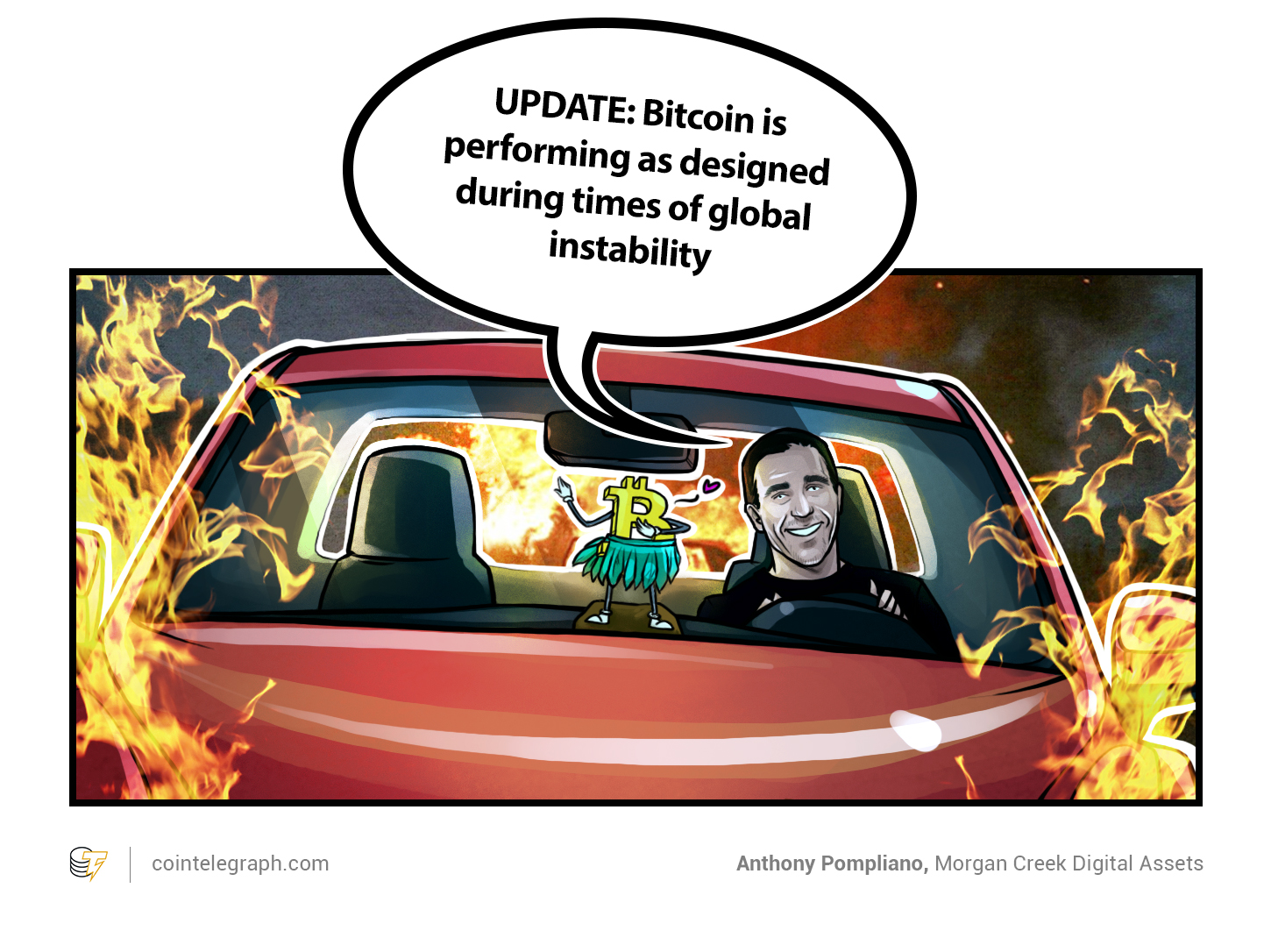 FUD of the Week

The warnings about India’s tough stance on crypto — which could see those caught dealing in digital currencies jailed for up to 10 years — have long been ringing in our ears. But this week, the CEO of a crypto and blockchain research firm put a figure on the opportunity that the world’s second-most populous country may be missing: $13 billion. Crebaco Global Inc.’s Sidharth Sogani added that he was skeptical that the country would even be able to pull off such a ban, given that it’s home to 1.3 billion people. According to Sogani, his company has made multiple attempts to share its insights with the governmental panel overseeing the clampdown, but its reports have fallen on deaf ears.

Noncustodial token trading platform EtherDelta is reportedly facing legal action from police in China in connection with an alleged exit scam. According to Dovey Wan, a founding partner at blockchain investment firm Primitive Ventures, the EtherDelta exchange was acquired by unnamed Chinese investors who subsequently issued $EDT — the token supposedly at the heart of the exit scam. Wan said investors are furious and have blown the whistle, sparking an official investigation to commence. On Twitter, he warned, “FYI Chinese police shows no mercy if any crypto scam involved large amounts of retail capital.”

An investment provider that claimed to offer returns of 900% on crypto within 14 days has been slapped with a cease-and-desist order by officials in Texas. New York-based Forex and Bitcoin Trader had advertised its scheme on Craigslist in Dallas, promising vulnerable investors that they could realize a $20,000 return from a principal investment of $2,000. The organization had falsely claimed to be a licensed broker that was authorized to trade securities. Investigators determined that the company had also misled investors by claiming it had an insurance policy. According to the Texas State Securities Board, it is the first state securities regulator in the U.S. to enter an enforcement action against a crypto-related firm.

Binance KYC breach — did it happen, and if so, who’s to blame?

Earlier this week, it emerged that Binance, the world’s biggest crypto exchange in terms of daily trading volume, had fallen victim to a hack that enabled the perpetrator to get its hands on more than 10,000 personal photos gathered for Know Your Customer (KYC) data — demanding 300 BTC (about $3.4 million) as a ransom. But are the hacker’s claims authentic, and who may be responsible? Cointelegraph’s Shiraz Jagati takes a look.

Experts believe that Bitcoin’s price fluctuations have been tied to the ongoing trade war between the U.S. and China. And, in a recent twist to the tale, Beijing has unveiled plans to beat Washington (and Facebook’s Libra) to the punch by launching a national cryptocurrency. Julia Magas explores when such a project could launch, the consequences it could have, and asks whether China could succeed where other countries have failed.

Following on from LTC’s second halving, Cointelegraph takes a look at the aftermath, the impact it has had on prices, and reaction from the crypto community. Even though there wasn’t much of a price increase, Joshua Mapperson reports that Litecoin has enjoyed a buzz on Twitter.