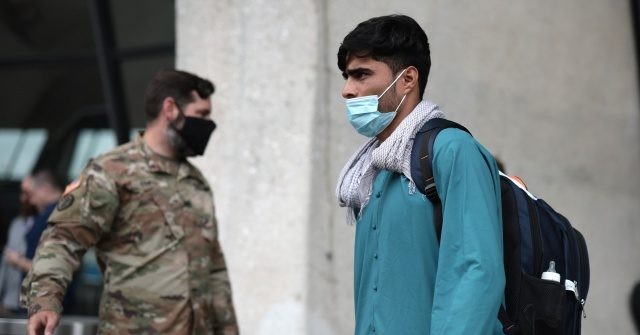 Afghans are arriving in the United States for resettlement, many without any paperwork and some with only “scraps of paper,” according to National Public Radio (NPR).

A report details the interworkings of the makeshift processing site for Afghans, set up by President Joe Biden’s administration, at the Dulles, Virginia, Expo Center. The site has processed nearly 30,000 of the 65,000 Afghans flown to the U.S. over the last month. The site is expected to process another 30,000 Afghans in the coming months.

Afghans processed at the site include those who have “no paperwork” or who have “just scraps of paper,” according to NPR:

Other Afghans at the center might have a long wait and an unknown future, arriving in the U.S. on humanitarian grounds. There are young adults separated from their parents with no paperwork. Others have just scraps of paper. They can apply for asylum or wait until Congress offers a special legal status as it did for those fleeing the aftermath of the Vietnam War. [Emphasis added]

At overseas processing sites, located in Qatar, Germany, and Spain, some Afghans seeking entry to the U.S. are being flagged for potential ties to terrorism. Subsequently, they are sent to Kosovo for further security review, NPR reports:

U.S. officials say of the thousands who went through Ramstein Air Base in Germany, only a small number are being detained and sent to a U.S. base in Kosovo because they were flagged as possibly having ties to terrorist groups. [Emphasis added]

The NPR story comes after multiple reports that Afghans are arriving in the U.S. despite a lack of paperwork to vet their identities and with security concerns.

This week, for instance, the Associated Press reported that Afghans have lied about their identities or destroyed passports to conceal their true identities to gain entry to the U.S.

Meanwhile, the Washington Post reported that the Biden administration has brought Afghans to the U.S. who were later “flagged for security concerns.” Likewise, administration officials told CNN that Afghans are arriving in the U.S. who do not have any “documents whatsoever.”

In some instances, Bloomberg reported that Afghans may be resettled across the U.S. despite having been flagged for security concerns. The Federal Bureau of Investigation (FBI), under such a plan, would monitor these Afghans.