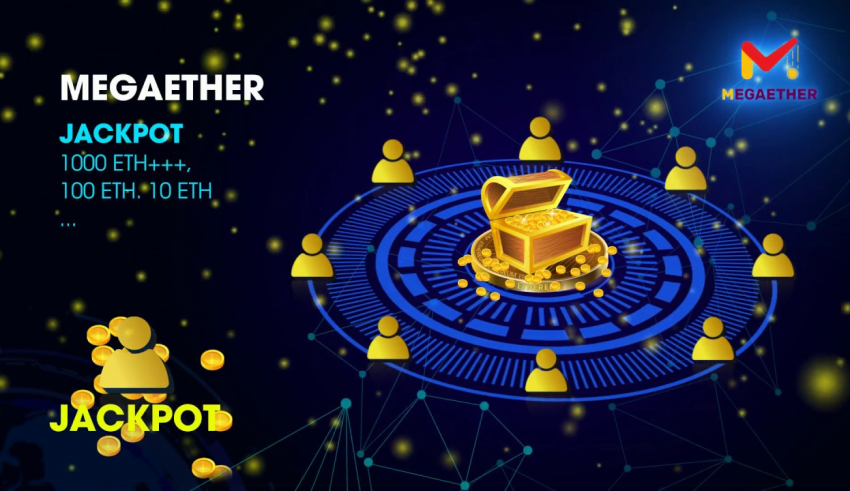 Latest blockchain-based lottery platform MegaEther has announced its new lottery with a grand prize of 1000 ETH and a total prize pool of 10,000 ETH.

While the global lottery industry has posted steady growth from $187.1 billion to $294.3 billion between 2004 and 2016, blockchain-based lotteries are widely regarded as the future. With increased transparency and borderless capability, blockchain lotteries can make the industry worldwide instead of geographically limited schemes that are prevalent today predominantly in the USA and Europe.

In addition to lottery services, a digital token is also being offered by MegaEther. The project has over 500 million MEGA tokens but the initial offering will only 50 million tokens being issued. Token holders will receive 40% commission on all lottery ticket sales which will be paid in ETH on a daily basis. The tokens can be exchanged and traded at lottery platform’s licensed cryptocurrency exchange. The exchange has an extremely user-friendly experience and allows users to buy digital tokens from fiat payment methods like PayPal and credit cards.

The token event is spread in three rounds:

MegaEther is essentially a DApp decentralized application running on the Ethereum blockchain. The project developer does not hold a controlling stake and is transparent and honest.

Only backers who buy the first-time sale token receive 40% of the profit from the lottery business, have a security certificate sent by mail 5% commission directly from buyers tokens, Selling a large number of tickets in the ref system is allowed to get 5-15% revenue from agents. Investors holding coins can deposit their tokens for Staking to receive 20% bonus per month.

How to Register for the Lottery and the token sale?

The registration process is fairly simple and is listed on the official website. The games will start on 8 August 2019 and initially, three major lotteries will be introduced including MegaPower with a top prize of 1000 ETH, Mega Daily Lottery with Jackpot of 1 ETH and Mega Instant Lottery with a jackpot of 3 ETH.

There are three steps to buy and profit from Mega tokens from the official website:

Blockchain Technology and lotteries are a match made in heaven as it helps address various challenges in the industry. It helps to introduce fairness, regulatory compliance and availability across the world. ETH smart contracts feature, if programmed right, can be completely corruption-free which is a big issue in online lottery games.

The prize pool is from 70% of the collected funds from lottery ticket sales and cannot be infringed upon by the management due to the immutable nature of Ethereum blockchain smart contracts features. If nobody wins the lottery, the amount is rolled over to the next pool and thus it keeps on increasing until there is a winner.

Problems resolved by the MegaEther team include:

More in-depth details and workings of the new lottery platform can be seen in the official whitepaper of the company. The whitepaper details intricate composition of the new platform including its functioning algorithm, sales commission figures promised, further token sale’s details and the staking contract that the company has set up for its digital tokens.

For more information on the project, please contact support@megaether.co