Jeff Bartos, a former intern for former Democrat President Bill Clinton — now running as a Republican in Pennsylvania’s U.S. Senate primary — is laundering allegations dismissed by a court and expunged by a judge against his opponent Sean Parnell after former GOP President Donald Trump endorsed Parnell.

The move, which smacks of desperation from a candidate with close ties to Democrats attempting to revive his flailing campaign after Trump endorsed his opponent, came out in a Philadelphia Inquirer article late Tuesday evening.

Bartos, the Inquirer’s Jonathan Tamari wrote, believes Parnell is “unelectable” because Parnell’s wife — with whom Parnell has been going through a bitter divorce for the past few years — sought protective orders against him in 2017 and 2018. Interestingly, however, both orders were expunged by the court — and neither were extended. The first was dropped after the two sides agreed to terms some days later, and the second was dismissed by a judge.

Bartos’ criticism centers on two temporary protection-from-abuse orders issued against Parnell in 2017 and 2018. Neither was extended after a full hearing involving both parties, and both were later expunged. It remains unclear what Parnell’s wife accused him of doing when the temporary orders were issued. Parnell and his wife are in an ongoing divorce and custody battle.

Word of the protective orders has been quietly simmering in political and media circles for months, but Bartos made them public for the first time in an interview Tuesday. He planned to release a memo Wednesday on the matter and why it should steer Republicans away from Parnell.

Bartos, a real estate developer in Philadelphia’s Main Line, is quoted next in the story as saying the allegations are “disqualifying” for Parnell.

“Sean’s actions and attitude toward women are disturbing, well-documented, and disqualifying,” Bartos told the newspaper. “The citizens of Pennsylvania deserve to know this information.”

Later in the piece, the Inquirer’s Tamari wrote of the documents:

Butler County officials served temporary protection-from-abuse orders against Sean Parnell on July 5, 2017, and June 8, 2018, according to call records from the Butler County Sheriff’s Office. In both instances, Parnell was ordered to give up his guns, and he was ordered to leave his home in the 2017 incident.

The first order was withdrawn under an agreement between Parnell and his wife 13 days after the initial order. A judge denied a full protection order after a hearing in the 2018 case, according to court records provided by the Parnell campaign.

Bartos has been circulating a memo describing the documents. The Bartos memo, also obtained by Breitbart News, does not include the most important details, however: That neither order originally sought by Parnell’s wife Laurie Snell Parnell — a realtor in Pennsylvania — was extended when the court had full hearings on them, and that both were expunged.

What’s more, Parnell and his wife were granted equal 50-50 custody of their children as the divorce proceedings continue, and later his wife even regularly praised him publicly as he ran for the U.S. House against Rep. Conor Lamb (D-PA) last cycle:

Parnell’s wife regularly retweeted his campaign messages, and attacks on his opponent Lamb throughout 2019 and 2020.

The bottom line here is that divorces are oftentimes messy, complicated, and nasty, with both sides flinging accusations at each other — Parnell even sought a similar order against his wife in court, too, according to the Inquirer story — and the incomplete picture of documents that Bartos has been circulating represents a new low in gutter-level slime politics. 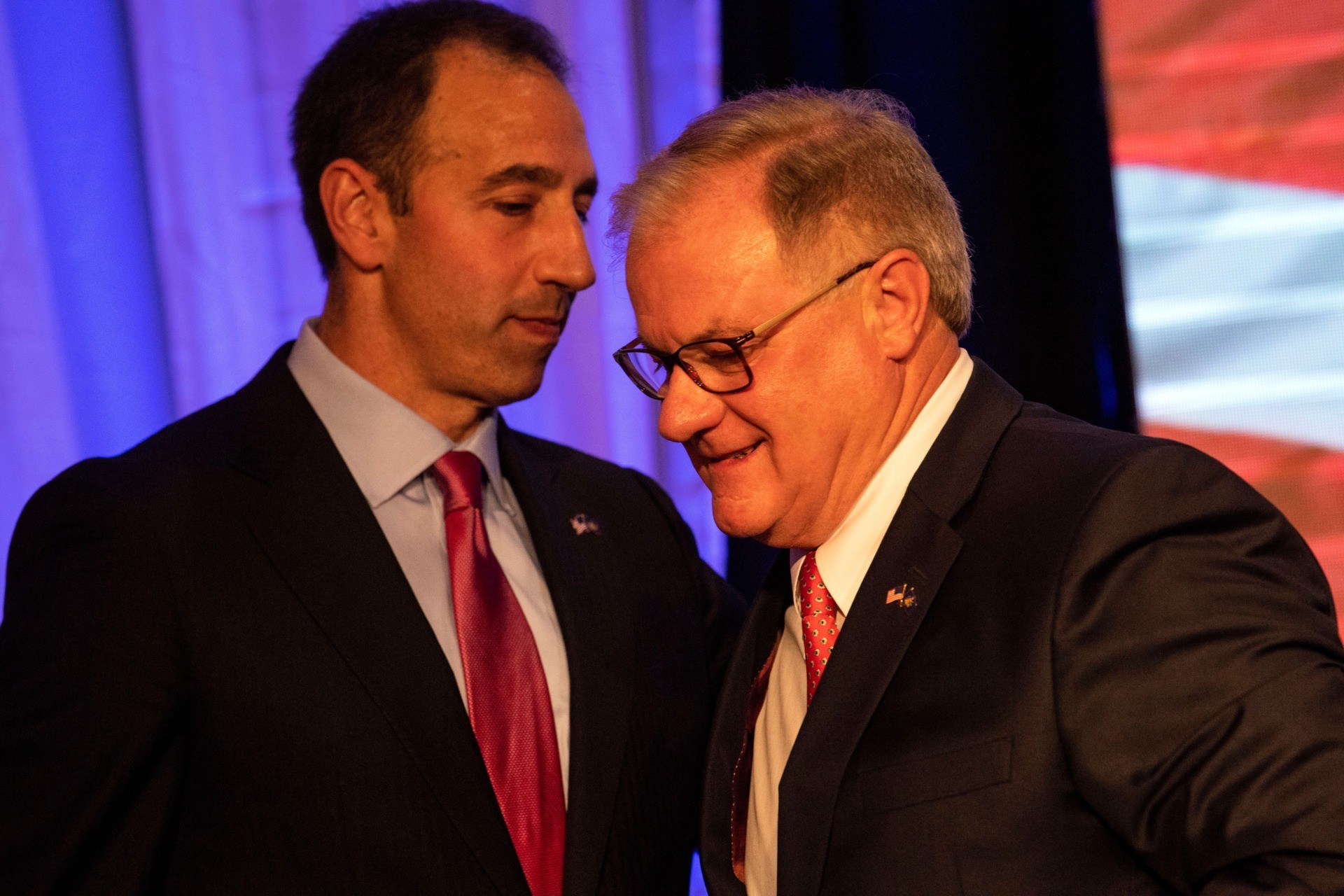 Parnell’s wife has not made any allegations of abuse publicly, and the documents that Bartos has been circulating, the Inquirer notes, have no details about what specifically led to these initial orders which were later expunged.

“Temporary protective orders are issued after brief hearings before a judge involving only the accuser, not the accused,” the Inquirer’s Tamari wrote. “They can become permanent after a hearing involving both parties, but neither of the orders against Parnell went that far. None of the documents describe the alleged actions that led to those initial orders.”

In response to the smear, Parnell issued a statement to the Inquirer, which only printed part of it. Parnell’s campaign subsequently also issued the full statement to Breitbart News:

Jeff Bartos is a desperate liar, plain and simple. Let me be crystal clear, Bartos’ allegations are horrific lies and all the evidence proves it. Not only does he know full well that these allegations are provably false, but his willingness to spread these lies without any consideration for the damage he’s doing to my three young kids is utterly disgusting. It takes a truly dishonorable “man” to stoop this low just to score a few cheap political points. He should be ashamed of himself. This is gutter level politics at its worst and nothing more than the last gasp of a campaign on life support. If Jeff’s lies only affected me it would be easy to ignore them, but they don’t. Unfortunately, Jeff’s lies hurt my three kids and that’s unforgivable. Jeff needs to do the honorable thing. He needs to apologize to my family and withdraw from the race.

What’s particularly interesting about this gutter-politics-at-its-worst sleaze, however, is the timing of it all. Parnell, an Afghanistan war veteran who led “Outlaw Platoon” — which saw some of the most intense fighting against Taliban terrorists along the Pakistan border back in the early 2000s — has risen to the front of the pack and surged in Pennsylvania amid President Joe Biden’s withdrawal failures. After a Breitbart News profile on Parnell’s rise to the front of the U.S. Senate primary, Trump endorsed Parnell over Bartos and other contenders like Carla Sands and Kathy Barnette. 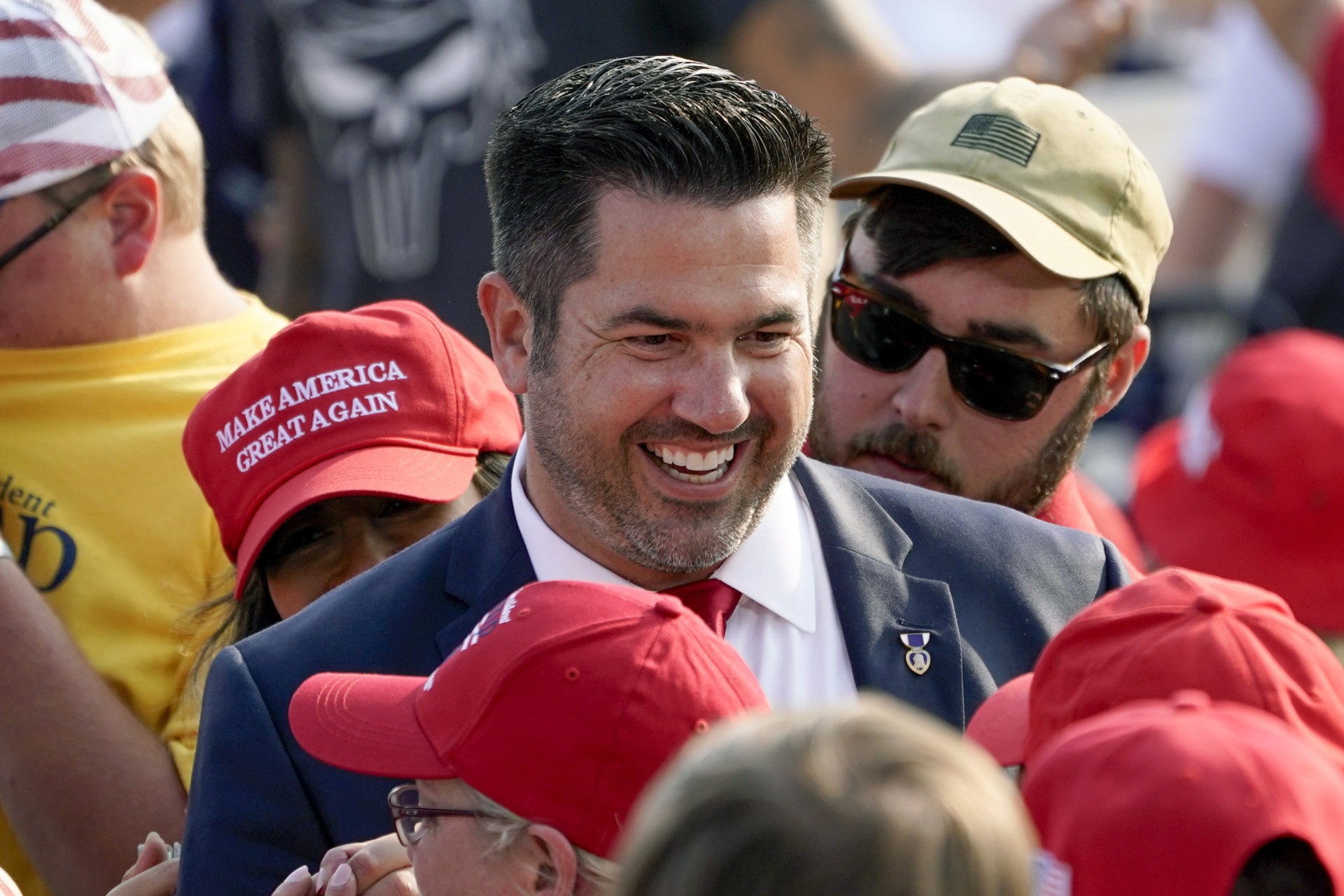 Sean Parnell walks through people gathered at a campaign rally for President Donald Trump at the Pittsburgh International Airport in Moon Township, Pa. Parnell, a decorated veteran and regular guest on Fox News programs who became a favorite of former President Donald Trump, is expected to announce his candidacy for the Republican nomination for Pennsylvania’s open U.S. Senate seat. (AP Photo/Keith Srakocic, File).

So then Bartos began crafting this memo digging up nasty divorce details and documents to spread what appears to be an inaccurate smear against his opponent in a last ditch effort to blunt the power of Trump’s endorsement. But what’s even more interesting is that Bartos himself — while he now claims to be a Republican — has a lifelong history of aligning himself with top Democrats nationally and in Pennsylvania.

In fact, Bartos interned in Bill Clinton’s White House according to a June report from Pittsburgh City Paper — and has regularly donated to and supported top Democrats nationally, including praising Hillary Clinton as recently as 2014, just two years before Trump beat her. Pittsburgh City Paper’s Ryan Deto reported in June of this year:

According to Federal Election Commission fillings, Bartos donated $1,000 to the Democratic Senatorial Campaign Committee in 2011. And, in an interview with the Philadelphia Inquirer in March 2014, Bartos spoke about his time as an intern for Democratic President Bill Clinton, describing the Clintons as “incredibly approachable,” and saying Hillary Clinton had been unfairly maligned.

“Mrs. Clinton gets a bad rap for being distant,” said Bartos in 2014 when asked to describe the Clintons. “She couldn’t have been nicer to a 20-year-old unpaid staffer. … We had a birthday party for her chief of staff, and she helped me clean up — pick up the plates, throw them in the trash.”

Also, Bartos has a close relationship with Pennsylvania’s Democrat Lieutenant Gov. John Fetterman, according to a report last August from the Philadelphia Citizen. Fetterman, who is running as a Democrat for the same U.S. Senate seat for which Parnell and Bartos are running as Republicans, is quoted in the story praising Bartos as “just a really good dude.” 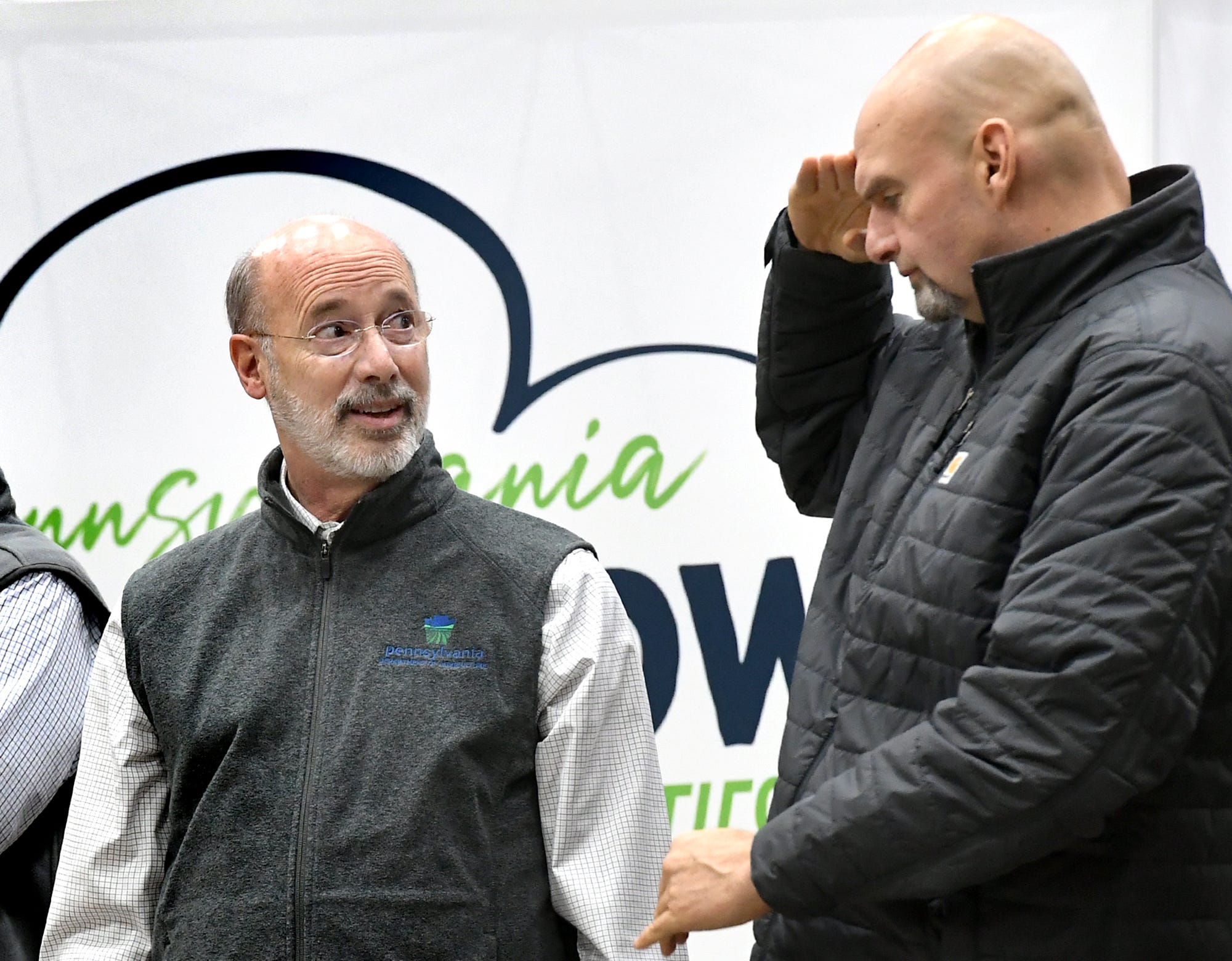 “John is a mensch,” Bartos said of Fetterman in reply, according to the report.

The Philadelphia Citizen report even details how Bartos and his wife has regular dinners with Fetterman and his wife:

In short order, they became a type of political odd couple, their close relationship a testament to the quaint idea that, in politics, you can disagree without being disagreeable, and that, when you know a rival—really know them—it enhances the likelihood of finding common ground.

They’ve broken bread together with their spouses— after the first time John and Gisele came over for dinner, Bartos’ wife Sheryl said, “They’re lovely. Why don’t we meet more people like them in politics?”—and their kids have gotten to know one another.

Despite all of this nasty gutter smear politics, Parnell has Trump’s endorsement so he is clearly the immediate favorite for the GOP nomination in Pennsylvania’s Senate race next year. Fetterman, meanwhile, has to fend off a challenge for the Democrat nomination from none other than Lamb — Parnell’s opponent in the U.S. House race last cycle — but currently leads polling there. Whoever wins will replace retiring Sen. Pat Toomey (R-PA) — and the seat could determine which party wins majority control of the U.S. Senate in the 2022 midterm elections.