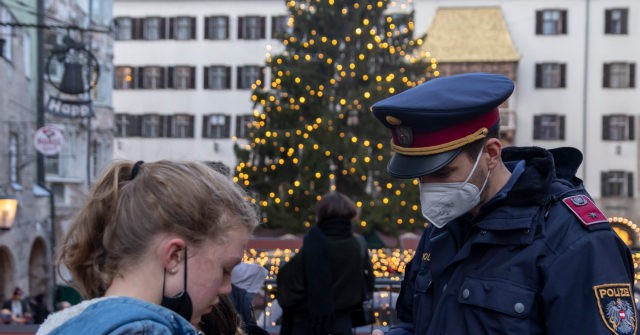 Brexit leader Nigel Farage has exclaimed “thank goodness we left” the European Union in response to reports that the head of the bloc, European Commission boss Ursula von der Leyen, saying mandatory vaccination should be considered, while countries like Greece are threatening to fine senior citizens for every month they go unvaccinated.

“They have gone power mad in the EU, thank goodness we left,” Nigel Farage remarked while tweeting an opinion piece from The Telegraph laying bare the countries across the bloc that have instituted some form of Covid authoritarianism.

On Thursday, European Commission President Ursula von der Leyen said that it was “understandable and appropriate” to have a bloc-wide discussion about mandatory vaccination.

“How we can encourage and potentially think about mandatory vaccination within the European Union, this needs discussion,” Commission President von der Leyen said. “This needs a common approach, but it is a discussion that I think has to be met.”

The head of the EU’s powerful executive branch made the remarks after her former mentor, outgoing Germany’s Chancellor Angela Merkel, announced a de facto lockdown on the unvaccinated, excluding them from non-essential retail and leisure facilities. Dr Merkel also said that the German parliament will shortly be asked to vote on mandatory vaccination, and that she backs the measure.

Last month, Austria became the first major country in Europe to introduce a nationwide vaccine mandate, starting in February, with those who refuse facing fines or possibly prison if penalties are not paid.

Mass demonstrations erupted across Europe on Saturday with anti-lockdown protests being staged in Vienna, Rome, and The Netherlands. https://t.co/gyqNiesWQ3

Italy will also be fining citizens €600 (£511/$679) to €1000 (£851/$1,133) if they travel on public transport without the Covid passport known as the Green Pass, which proves vaccination, recent recovery, or a negative test result. Italy will also institute the Super Green Pass, which excludes test results. Those without the new passport will be restricted from such activities as indoor dining.

The Netherlands and Belgium, meanwhile, have been locking down and imposing more restrictions in recent weeks.

The wave of restrictions across Europe has given rise to protests in Brussels, Vienna, Rome, and Rotterdam.

However, inside or outside of the EU, Britons may find themselves subject to their own vaccine mandate unless citizens continue to go along with government inoculation programmes, with a senior Tory party and government figure refusing several times to rule out mandatory vaccination or lockdowns for the unvaccinated on Friday.

“It’s not something that we want to do or plan to do in the United Kingdom. The reason why we don’t want to and hopefully won’t have to do any of that is because of the booster,” Conservative Party co-chairman Oliver Dowden warned on Friday.

“So as long as people, when they get the call up, take that booster jab — it’ll be open to everyone by the end of January — I’m confident that… we’ll be able to withstand even given the challenges of this new variant,” Mr Dowden added.