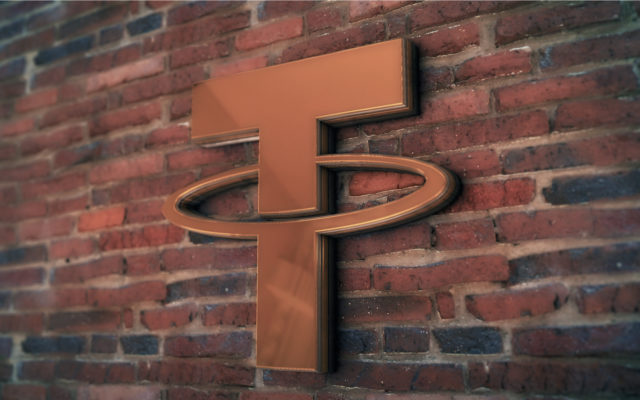 Controversy continues to surround Tether, as recent market moves have vaulted the crypto into the sixth position on the world’s list of digital assets.  As Tether fires up its printers once again, many market commentators wonder if this will lead to a sustained BTC prop above the 10K level.

Controversial cryptocurrency Tether continues to make headlines for itself, although many commentators have highlighted issues which suggest it’s for all the wrong reasons.

Recent price moves have vaulted USDT past Binance and into sixth place on the world’s list of most valuable cryptocurrencies.  However, it appears some traders have failed to view the move as having a significant level of legitimacy. As Tether continues to influence broader market sentiment, commentator @CasPiancy tweeted: 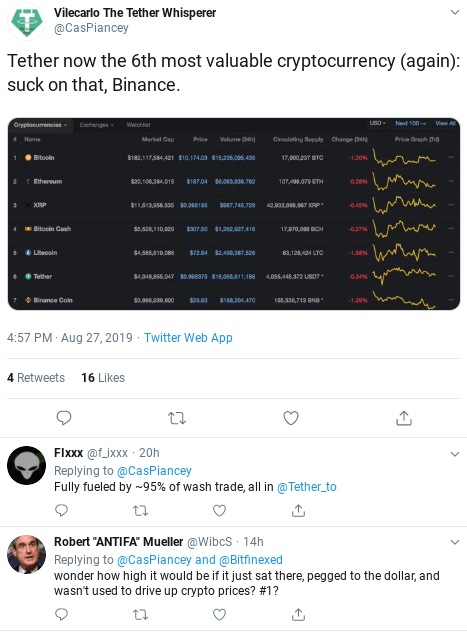 Of course, crypto issuance remains another factor influencing sentiment, as Tether has fired up its printers again (for the first time in a month).  Coin Market Cap’s latest circulation statistics show circulating supply levels at 4,055,445,372 USDT while total supply levels currently stand at 4,095,057,493 USDT.  On this side of the issue, commentator @CasPiancy also remarked: 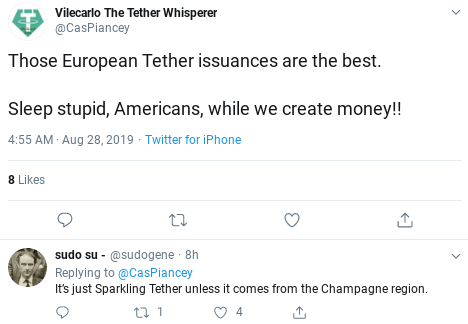 Tether’s widely-questioned position in the market has been targeted by crypto traders on multiple fronts, which gained traction after Tether announced changes to the way its value would be backed by underlying assets.  After reversing its claim to be backed 100% by the U.S. dollar, many traders questioned the ways crypto legitimacy might be impacted within the market at large.

Further questions remain with respect to the way recent moves in Tether will impact BTC valuations.  Prior rallies above the 50-day EMA on the Bitcoin / Tether price charts have established a strong support region above 9,260.  However, RSI indicator readings largely call these moves into question given the bearish divergence conditions that are currently present on the daily charts.

Recent fundamental events could have a significant impact on the chart perspective, given the close proximity of historical support levels.  In other words, short-term injection of price volatility could have the effect of sending prices through support now that Tether has moved higher on the global list of crypto valuations.

Fundamental catalysts may have the potential to either confirm or deny bearish divergences in the daily indicator readings and Tether’s current market valuation near important psychological price zones at 10K could pave the way for major trends in the cryptocurrency as things unfold over the next several weeks.

Do you think Tether’s fundamental catalysts will keep Bitcoin / Tether valuations above 10K?  Let us know in the comments below!